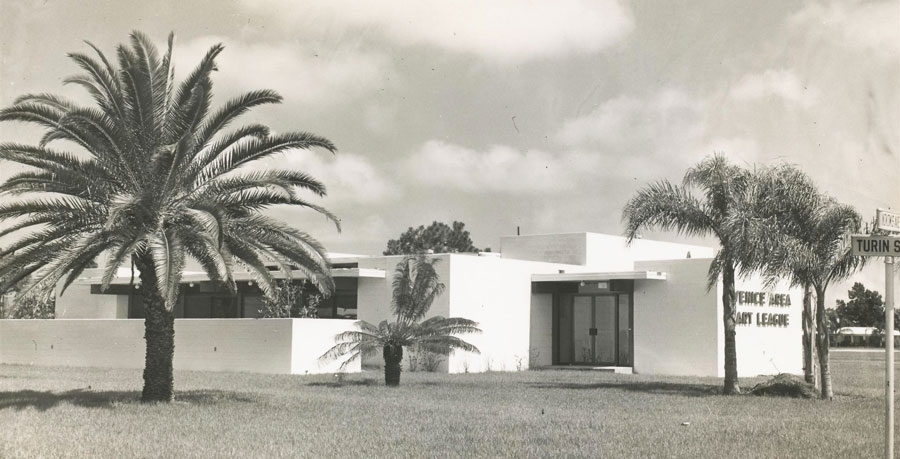 The Venice Art Center claims a place in Venice history

Artists often say the light in Venice is perfect for painting.

Local legend has it that artists gathered at the beach to paint in the 1950s when they decided to hold what is believed to be the first exhibit of the works of local artists in Venice at the Venice-Nokomis Woman's Club in 1956. The show had 27 artists participating and at least 200 people who came to view according to an early newspaper account.

By 1959, Nokomis resident Dorthea (Mrs. Arch) Wilson formed the Venice-Nokomis Art Association and served as its president. In 1960 the organization held its first outdoor exhibition in the El Patio Hotel Arcade. Its success inspired them on to look for a way to have a permanent building where they could show their work in a gallery and have studios for classes.

The organization soon changed its name to Venice Area Art League. In 1964, its members decided on a piece of land In East Blalock Park on the corner of Nokomis Avenue and Turin Street, which they leased from the city for $1 a month for 99 years. The lease required the organization to keep its building maintained and open to the public, and the grounds in good condition. The lease did not allow for an expansion of the building.

With George Youngberg Sr. as building committee chairman, Edward Seibert was hired to design the new building in the Sarasota School of Architecture style. The 5,000 square foot concrete building required $70,000 to build. Dr. Garold Stryker chaired the general fund committee charged with raising the money. According to newspaper reports, Mr. and Mrs. Louis LaMotte of Casey Key began the drive with a $10,000 donation and a challenge to match it. Marjorie (Mrs. Carl) Hamilton and Chariot Lampe immediately met the challenge bringing the total to $30,000.

W.E. Dingwell of Dingwell Thyne Inc. of Sarasota was the contractor. A groundbreaking was held Sept 26, 1967 with Stryker and Lampe using golden shovels to start the construction. Mayor Smyth Brohard was quoted as calling it “a great day for the Art League and a great day for the city of Venice.” The new center was opened March 31, 1968, although at a final cost of $80,000. The league had 300 members from Osprey to Port Charlotte who paid $5 a year for an individual or $7 a year for a family membership.

The location was perfect. Across the lawn was the new library and there was talk of building a civic center on the campus that even then was referred to as the “cultural campus.” 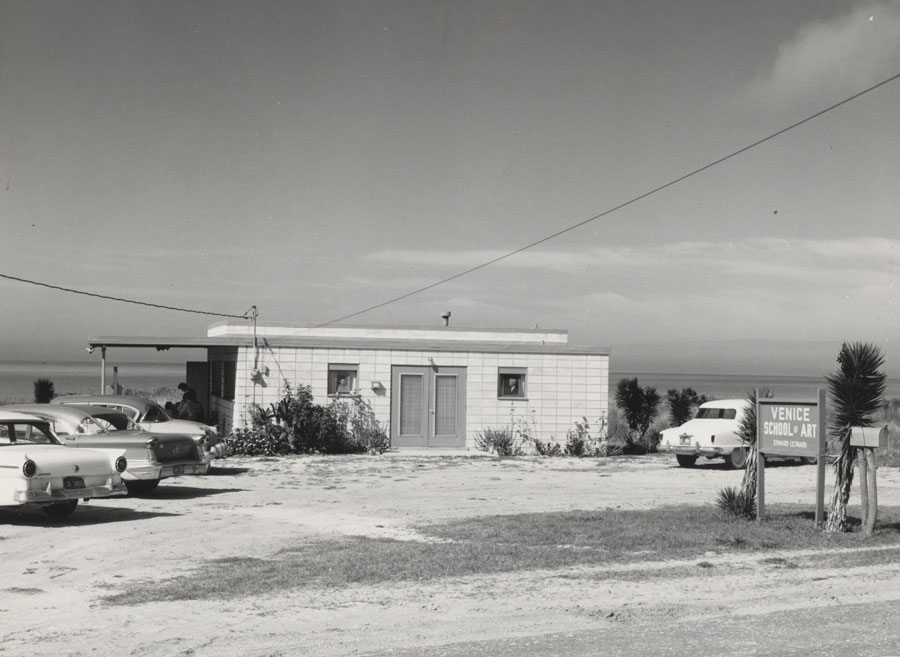 Among the earliest artist members and instructors was Tatiana McKinney. McKinney grew up in Russia where she studied art with Sergel Vinogradov in Riga, Latvia. She married U.S. State Department official Samuel McKinney and lived all over the world, until moving to Venice in 1963.

In 1971 she became the first American to receive the Capa D'Ora Award from Il Domo. Brussels, Belgium.

In St. Patrick Catholic Church in Washington, D.C., among the marble and plaster statues. Italian enamels, stained glass and mosaic are representations of 16 saints of the New World created by McKinney. Together they are the Gallery of Saints and Blesseds of the Americas. It took McKinney two years to complete.

Her painting “The Resurrection,” was presented as an official gift of the Archdiocese of Washington to Pope John Paul II when he visited the U.S.in 1979.Locally, her work can be seen at St. Martha Catholic Church in Sarasota and St. Raphael Catholic Church in Englewood, Van Wezel Performing Arts Hall, as well as many other placess across the nation.  McKinney taught at New College in Sarasota and in North Carolina during the summer.

What McKinney was known for at the Venice Art Center was the style of painting she developed and taught. Using metallic leaf, canvas and linen with acrylics and oils she created batik like painted tapestries.

"She would lay down color then outline the form. For example if the form was a vase, she would put the color of the vase on the canvas first and then create the form of the vase,” Scott said. "It was a very interesting and free technique."

"You could go into her studio and find one person working on a wall hanging, while another was working on watercolor and still another working on a portrait," Scott said. "She was very strong on composition so she could help with almost anything.”

Another interesting teacher Scott remembers is Eldon Faviet who taught his style of watercolor painting he called "Beyond Reality."

“It was verging on abstract, with clean cut lines. Just the opposite of Tatiana's style” Scott said.

Diversity was always a strength of the art center. Evening classes were added in 1976 and children's summer art camps became a mainstay. Its 10 shows throughout the year were drawing thousands of spectators. About 150 artists were taking lessons, holding shows or otherwise engaged at the Art Center.

As the Art League celebrated its 25th anniversary in 1984, it was apparent to its 900 members that more space was needed. It also became apparent that the building was in dire need and the organization in financial crisis.

It was reported in the news that the building “was peeling, its roof leaking and the lawn and grounds were seedy.

The next year, founding member Ethel Morison was elected president. To help the center get through the crisis, Morison reached out to the community. She encouraged the Art League to hold more social events to engage the residents and to form alliances with the business community.

In 1994 the Venice Art Center - no longer the Venice Area Art League - announced a future 4,000-square-foot expansion in the works. Among the board members at this exciting time were the president, Wally Appel, Henry Pfeifle, Phyllis Bekgran, June LeJeune, Richard Hopper and Polly Taylor, many of them noteworthy artists.

Enough funds were raised to make the immediate repairs. But the need for space remained and patrons of the center were committed. Under the leadership of Wally Appel, a fundraising committee was appointed in 1993 to raise the necessary $450,000.

Its members were then Mayor Merle Graser and his wife, Pat, Joan McGill, Richard Hopper and Bob Vedder. They developed the Friends of the Venice Art Center.

Edward J. Seibert returned to design the new building, more in keeping with the Northern Italian Renaissance architectural theme. By 1997, the Venice Art Center as it is today was completed with additional studio space, a large gallery and two small galleries, a cafe and a gift shop.

In 2018, the center has more than 1,400 members and about 260 volunteers. It provides more than 650 classes in various media of art for ages from 6 up. There are multiple art shows of every kind of work imaginable from painting, drawing, mixed media, photography, three dimensional, and more created by local artists and traveling displays. All this is made possible by the nine employees who report to the facility’s executive director, Mary Moscatelli.

A 2015 public arts project, "Sea Venice” exhibited in Venice which local artists painted on preformed statues of dolphins and turtles. For those who remember the 2005 "Pigs in Paradise," the similar concept of dolphins and turtles on display all around downtown Venice will be a much welcome sight - one that tourists will come to see.

“The Art Center is committed to being the best community art center any town could have – for its artists, art lovers, and its children,” past Board President, Jean Trammell said.